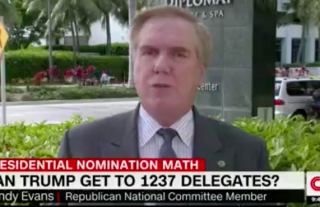 By now you’ve definitely heard about how Republicans could end up going into the Republican National Convention in Cleveland, Ohio without a clear winner. But, did you know that they could come out of the week without one too? That’s the worst case scenario, at least according to a member of the all powerful RNC’s rules committee.

So here’s how you thought it would go. If neither Ted Cruz nor Donald Trump get to that magic number of 1,237, the delegates would basically go through a series of balloting until there is a winner. Of course, the assumption is that there would be a winner by the end of that week. That’s why I was pretty flabbergasted this weekend, when I heard RNC Rules Committee member Randy Evans talk about a scenario where Republicans could come out of the week without a nominee.

Watch below from Michael Smerconish’s show on CNN:

Here is what Mr. Evans said:

“Then there is the possibility of unintended consequences. Under Robert’s rules of order, anyone of the the 2,472 delegates, anyone of them, can raise a point of order if they all did, you could have a filibuster and end the week without a nominee.”

CNN’s Michael Smerconish kind of breezed through this statement, and yes, I agree it’s pretty far-fetched. I even checked in with Republican delegate expert Josh Putnam about this. He says the more likely scenario would be that the delegates would stay in Cleveland until a winner emerges — even if that means weeks, and many, many rounds of balloting. But, still, as we’ve seen with this Republican primary: anything is possible, including two longtime rivals teaming up to #stoptrump.