In Wake of Dallas Shooting, We Can Still Call for Responsible Police Reform 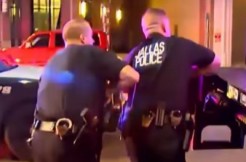 As a writer for Law Newz, I’ve written about murders, rapes, dismemberment, and all kinds of frauds. That’s the job. No matter the subject matter, you write the article, get it done. I thought I was getting pretty thick-skinned. Thursday proved me wrong. Micah Xavier Johnson murdered five police officers at a Black Lives Matter rally in Dallas, Texas. At a Friday press conference, Chief David Brown said negotiators managed to get Johnson to talk about his motive. He reportedly said he wanted to kill white people, “especially white officers.” He was angry about the recent shootings of black men by police officers (probably Alton Sterling, and Philando Castile).

Thursday was an outrage. Hearing about it left me feeling drained. Some of the reactions to the shooting haven’t been heartening, either. Here’s one from a former Congressman.

(CNN’s Don Lemon did a good job explaining why this statement was irresponsible and wrong.)

And yesterday, I actually saw quite a few tweets in support of Johnson, but looking right now, I simply can’t seem to find them again. Deleted? If so, good. Those were dumb things to say. Violence is a self-destructive tool for social change. When we look at revolutions—whether it’s a socialist power grab in 1959 Cuba, or a militant right-wing coup in 1973 Chile—it’s clear that no matter how good their intentions, people who use violence to make change don’t really stop killing even after they get the change they want. The means itself becomes the end.

This article is simply a call for people to be as measured and incisive as they can be about this.

The Dallas shooting was disgusting. We must also accept that we should have a healthy skepticism of law enforcement. These are not mutually exclusive things. Micah Xavier Johnson was a horrible person (in fact, Dallas cops gained a fantastic reputation in recent years). And we can also admit black and brown people are disproportionately affected by law enforcement in general. These are not contractions.

An investigation is pending, but man, Philando Castile died needlessly. In a video recorded Wednesday, his girlfriend Diamond Reynolds said he was shot by a Minnesota police officer when going for his wallet. Reportedly, he’d advised the officer he had a firearm. Reynolds recorded the aftermath of that shooting, and posted it to social media.

An investigation is pending, but Alton Sterling was clearly shot and killed by police in Baton Rogue, Louisiana, while they were pinning him down. Video of the shooting itself was posted to social media.

It might be hard to care for Sterling. With his prior convictions (including sexually abusing a minor), he makes for an unsympathetic victim. Doesn’t matter. Due process is, in part, about applying specific punishments to specific wrongdoings. After all, I think convicted sexual assailant Brock Turner got off easy. It doesn’t mean he should get randomly harmed by cops.

The institutions meant to serve us can sometimes also harm us. I don’t think this is a controversial statement. It’s actually the idea that drove the American Revolution. This is nothing new.

Stop-and-frisk practices disrespect due process. Study after study finds that black people are disproportionately arrested for drug offenses despite using drugs at about the same rate as white people.

And yes, these facts don’t contradict the reality that to be a police officer, one must be brave. One must want to protect others at the cost of one’s own life. And it doesn’t disrespect the memory of those five Dallas officers—Lorne Ahrens, Michael Krol, Michael Smith, Brent Thompson, and Patrick Zamarripa—to say that changes are needed.