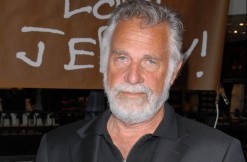 You know that old guy, the one in the Dos Equis beer commercials, who comes off like James Bond’s cooler uncle? “The Most Interesting Man in the Word.” That’s right. That guy. His real name is Jonathan Goldsmith, and he recently filed a countersuit in California against his talent agency, which in turn says he’s the biggest deadbeat in the world.

Goldsmith allegedly stiffed his agency on fees owed from doing Dos Equis commercials, according to a beach-of-contract lawsuit filed in October by Gold Levin Talent. Apparently, he hasn’t been making payments since November 2014. The agency spat on him as a “relatively unknown actor, with little talent and few credits to his name” before doing the beer ads. They went as far as to call him “The Least Honorable Man in the Entertainment Business.” Aw, snap.

“Apparently Goldsmith’s preference for Dos Equis intoxicated him into believing that he could ignore his promises and obligations,” the lawsuit said.

But Goldsmith’s countersuit, filed Feb. 9, claims his agency wrongfully disclosed his 2012 contract with the Dos Equis folks, hurting his career. The Most Interesting Man in the World said the “willful and malicious decision to disclose the terms of the confidential 2012 agreement has badly damaged Jonathan’s business relationship with advertiser and jeopardized his future as the spokesman for Dos Equis beer.”