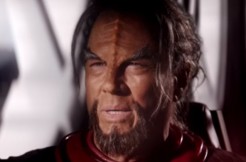 An amended lawsuit by Paramount Pictures and CBS Studios pins the makers of a Star Trek fan film for using the Klingon language. Guys, we’ve gone where no legal action has gone before.

The amended complaint, issued Friday, says Paramount’s and CBS’ claim to Klingonese, an honest-to-god language they invented, originates to when it was first spoken in the 1979 film, Star Trek: The Motion Picture. They went on to, no joke, license a 1985 book, The Klingon Dictionary, a reference for grammar, words, and pronunciation. In Star Trek, the language is spoken by the Klingons, a warlike alien species with big, ridged foreheads.

The suit is against the makers of Axanar, an in-production fan film set before the original Star Trek starring William Shatner. These guys got on Paramount’s radar after setting up their funding campaign with Prelude to Axanar, an $80,000 proof-of-concept made like a History Channel documentary except in space. This wasn’t some grainy student film. The production values were high, and they even got several Star Trek alums to participate, including Tony Todd, a respectable B-movie heavy, and actor on The Flash. Investors on Kickstarter were so impressed, they dished out over $1 million.

This went too far for Paramount, who filed the original complaint in December.

“The Axanar Works infringe Plaintiffs’ works by using innumerable copyright elements of Star Trek, including its settings, characters, species, and themes,” they said.

Lawyers for the fan film tried to get the lawsuit dismissed in February, saying it “would constitute an impermissible prior restraint on speech” since Anaxar hasn’t been made yet. The defendants also demanded more information on exactly what copyright issues were being violated. The original complaint was apparently too vague.

Hence the amended complaint issued Friday. In addition to the Klingon language, the plaintiffs say the fan production is biting things like logos, characters, and the “pointy ears and distinctive eyebrows” of Vulcans.

Executive Producer for the fan film, Alan Peters, claimed his project could only help the copyright owners.

“CBS has a long history of accepting fan films,” he told The Wrap in August, some months before the lawsuit. “I think Axanar has become so popular that CBS realizes that we’re just making their brand that much better.”