Lena Dunham Should Be Investigated For Animal Cruelty 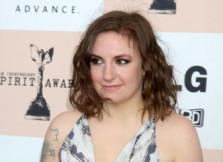 Lena Dunham is unfortunately in the news again. This time, because she gave her shelter dog, Lamby, away to a training center in Brooklyn and might not have told the truth about what happened. Due to the suspicious circumstances surrounding her surrender of Lamby, Dunham should be investigated for animal cruelty.

In an Instagram post explaining her decision to free herself from Lamby’s stewardship, she wrote: “Lamby suffered terrible abuse as a pup that made having him in a typical home environment dangerous to him and others- we needed to be responsible to ourselves, our neighbors and especially our beloved boy.” This statement apparently references three former owners–which Dunham remarked upon in a 2013 article for The New Yorker written right after she first adopted Lamby.

One small problem: those owners might not exist. Robert Vazquez, a spokesman for BARC Shelter, where Dunham originally adopted Lamby, said, in a statement to Yahoo Celebrity:

“We checked the records for Lamby. He was ‘owner surrendered, not enough time,’ so we do not know where she got ‘multiple owners that abused the dog’. When she adopted the dog from us, it wasn’t crazy. I have pictures of the dog loving on Lena and her mom, which is weird if the dog was abused. It wouldn’t be cuddling with her or be in the bed with her ‘boyfriend’ in the pages of Vogue.”

Vasquez continued to cast doubt on Dunham’s account. “If Lamby had a bad past or was abused, do you think BARC would have adopted him to Lena knowing she’s a new star and put her  — or the dog — in that situation? We would have told her if the dog had issues. We are a no-kill shelter. We don’t lie about the dogs’ histories because that gets them returned — and mentally it’s not good for dogs. It’s just hard to believe the dog was nasty when she took Lamby to every green room with her…4 years ago.”

So here’s a genuine question: is the Lamby scandal just another case of Dunham Derangement Syndrome or is the collective anger at the Girls star actually justified this time around?

Somewhat of a serial fabulist–Dunham might have lied about voting for Hillary Clinton during the 2016 Democratic primary–it’s hard to accept her story about the circumstances surrounding Lamby’s removal from her orbit. Here’s a gem from Dunham’s first alleged foray at being a failed dog owner:

“The first night, I woke up every hour on the hour, heated the bottles, rubbed the anuses. Every so often, the puppies cried and I’d reach down into their box, letting whoever got there first suckle my index finger. It was the weekend, so I had all the time in the world to spend with them. But by the end of the second afternoon I was an Octomom-style mess. They weren’t eating enough. They weren’t pooping enough. Once, I left the room for too long and when I came back they were sucking each other’s tiny dicks, in a circle, like crazed swingers, blind to the fact that those things weren’t nipples.”

This obviously never happened.  So, it shouldn’t take much effort–including that of the blind hatred varietal–to let Vazquez take the air out of her story here.

Lamby is doing much better now. That’s good, of course, but he wasn’t doing so great when Dunham traded him in for a purchased (i.e. not adopted) pair of poodles in March. According to Zen Dog Training owner Matt Beisner, Lamby arrived at his training facility in an awful state. Speaking with The Cut, Beisner described the dog as “A hot mess, and a train wreck,” with a terrible temperament, who was heavily medicated and drinking his own urine.

So, if Lamby did in fact suffer some form of abuse or neglect, it’s entirely possible it happened after he was adopted by Dunham and not before. Since Dunham owns residences in both Los Angeles and Brooklyn and since she had Lamby in her possession for the past four years, let’s take a look at each state’s laws on point.

“…whoever, having the charge or custody of any animal, either as owner or otherwise, subjects any animal to needless suffering, or inflicts unnecessary cruelty upon the animal, or in any manner abuses any animal, or fails to provide the animal with proper food, drink, or shelter or protection from the weather, or who drives, rides, or otherwise uses the animal when unfit for labor, is, for each offense, guilty of a crime…”

“A person who…in any way furthers any act of cruelty to any animal, or any act tending to produce such cruelty, is guilty of a class A misdemeanor…”

Therefore, even if Dunham’s treatment of Lamby was simply unintentionally harmful to her once-beloved pup, whether by, say, constantly being used as a prop for a wealthy celebrity, or not receiving the tender love and care necessary due to said celebrity’s jet-setting lifestyle, there’s a case to be made here.

In any event, with a he-said, she-said situation–as this is–with one side not exactly known for veracity and the other side being the outraged staff at one of the nation’s premier animal sanctuaries, there should at least be some effort made to find out what really happened to Lamby while he was in Dunham’s care.