Led Zeppelin Accused of Stealing ‘Stairway to Heaven’ From Another Artist 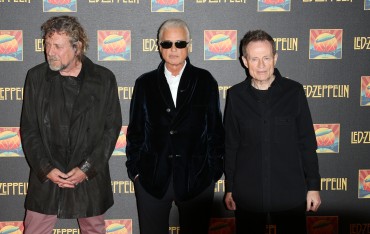 On June 14, Robert Plant and Jimmy Page will head to a federal courtroom in California as a jury decides whether the famous opening guitar melody of “Stairway to Heaven” was stolen from a little-known 1967 song called “Taurus.”

“Taurus,” an instrumental track by the band, Spirit, was written and copyrighted in ’67 by Spirit’s now-deceased frontman, Randy California. While he was alive, Randy California never took legal action. But now that California has passed away, his estate’s trustee is looking to cash in on the potential copyright claim. Led Zeppelin has held fast to its claims of originality, claiming (pretty unconvincingly, in my book) that neither Plant nor Page had ever heard “Taurus” and therefore, couldn’t possibly have copied it.

Awesome as Led Zeppelin is, I don’t believe any jury in the world is going to believe that the connection between “Stairway” and “Taurus” is just a coincidence. First of all, between 1968 and 1970, Spirit and Zeppelin apparently performed at the same venue on the same day at least three times, and at the same festival at least once. Oh, and Robert Plant reportedly just happened to have a copy of “Taurus” on his shelf of LPs. And then there’s the issue of the songs sounding exactly the same. Right around the 45-second mark, anyone listening can easily start picturing a 1969 Robert Plant saying something like, “dude, you gotta hear this riff!” as the distinctive melody floated through a hazy room.

Zep tried out its defense in a motion for summary judgment, hoping the federal judge would cancel the trial and just go straight to a defense verdict. But the judge wasn’t biting, and tossed the case over to a jury.

The jury’s decision might have been straightforward, had it not been for one little glitch: this, starting at 0:32:

Yep. This piece, composed by 17th century Italian baroque guitarist Giovanni Battista Granata, sounds even more like “Stairway to Heaven” than “Taurus” does. Ultimately, Zep’s best legal argument is, “sure, we stole the song – but we stole it from that Italian baroque guy, not from Randy California.” Copying from Granata wouldn’t be legally actionable, because, as are all compositions prior to 1923, Granata’s work would be part of the public domain, and not protected by copyright laws.

I suspect, though, that Page and Plant’s monolithic egos will prevent them from asserting the baroque connection as their best defense. Plant has argued vehemently that the opening to “Stairway” is actually not copied from anything, and rather, is simply a common chord progression.

Clearly, the right to claim originality for “Stairway to Heaven” is pretty valuable to Led Zeppelin. The plaintiff in the copyright suit already offered to settle the whole thing for one dollar, if Page and Plant would simply admit that they stole “Taurus” from Spirit; the two defendants refused, holding fast to their “it’s ours, we created it” claim. It’s a good thing that Zep has made millions over the years, because that kind of artistic righteousness could cost them a small fortune.

To put things in perspective, last year, a jury found that Pharrell Williams and Robin Thicke infringed on Marvin Gaye’s copyright with “Blurred Lines” and awarded the Gaye family $7.3 million in damages. Sam Smith and Tom Petty came to a friendly settlement giving Petty 12.5% of a similarly valuable writing credit for “Stay With Me” (inadvertently derived from Petty’s “I Won’t Back Down”).  Given that “Stairway to Heaven” has been going strong since before either Pharell or Smith heard his first chord, a verdict for the plaintiff here could result in a dollar figure that leaves the Gaye and Petty payouts in the dust.

Music, by its nature, is always a derivative art. No piece ever lives in a creative vacuum – an artistic reality that makes enforcement of copyright law complex and expensive when it comes to music. As these guys below hilariously point out, almost all popular music can be pared down to a few basic elements.

Personally, I’d really love it if Plant took the stand in June and testified to the jury:

“… if you listen very hard.

The tune will come to you at last.

When all are one and one is all.

To be a rock and not to roll.”