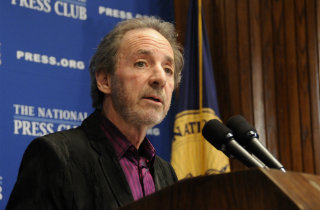 Actor/comedian Harry Shearer, probably best known these days as the voice of numerous characters on “The Simpsons,’ filed a lawsuit on Monday over money that he feels he his owed for possibly his most legendary role. Shearer’s company, Century of Progress Productions, is suing entertainment companies Vivendi and StudioCanal for $125 million, alleging that they’ve engaged in creative accounting to withhold royalties from the 1984 film “This Is Spinal Tap.” Vivendi and StudioCanal claim that the movie has never made a profit.

Shearer has launched a website, FairnessRocks.com, about the lawsuit, and tweeted a video statement about the dispute as well:

Today I filed a lawsuit against @vivendi and @studiocanal over #SpinalTap. Here’s why… #fairness rocks – pls RT pic.twitter.com/qxs5K8DzAG

“This Is Spinal Tap,” a rockumentary about a fictional heavy metal band (characters portrayed by Shearer, Christopher Guest, and Michael McKean long before the movie), is widely considered a classic and has been released twice theatrically, which is impressive when you consider that only the biggest blockbusters usually get theatrical re-releases. But according to the complaint, StudioCanal and Vivendi, which hold the rights to the film, its soundtrack, and related merchandise, have engaged in some “Hollywood accounting” to deprive Shearer and others from money that is rightfully theirs:

[A]ccording to Vivendi, the four creators’ share of total worldwide merchandising income between 1984 and 2006 was $81 (eighty-one) dollars. Between 1989 and 2006 total income from music sales was $98 (ninety-eight) dollars. Over the past two years, Vivendi has failed to provide accounting statements at all.

Shearer also alleges that the defendants have refused to project trademarks related to the movie while being overly adversarial when he tried to launch related projects.