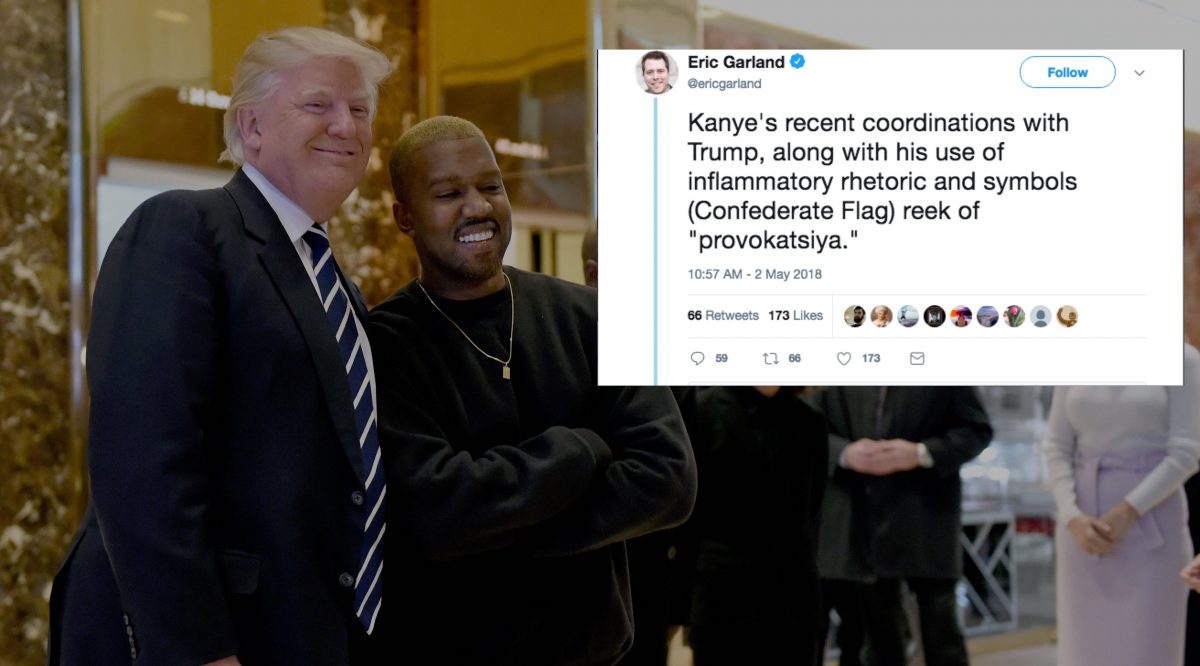 Garland floated the idea during a tweetstorm in miniature on Wednesday afternoon.

The conspiratorial-minded pundit began by remarking on the news that West had agreed to appear on Alex Jones‘ InfoWars radio program–a noted source of conspiracy-minded thinking in its own right. The Jones-West lovefest news was enough to set Garland off connecting the dots he’s famous for connecting.

In the first tweet Garland claims, “Both [Jones and West] are witting (or, implausibly, unwitting) at least assets of Russian intelligence, be it through Roger Stone (likely Jones’ case) or other corrupt elements.”

Both are witting (or, implausibly, unwitting) at least assets of Russian intelligence, be it through Roger Stone (likely Jones’ case) or other corrupt elements. https://t.co/hWCaZ5J5c2

Apparently realizing his latest subject could provide enough fodder for an entire–if smallish–Twitter thread, Garland soldiered on. He wrote:

Kanye’s recent coordinations with Trump, along with his use of inflammatory rhetoric and symbols (Confederate Flag) reek of “provokatsiya.”

Kanye’s recent coordinations with Trump, along with his use of inflammatory rhetoric and symbols (Confederate Flag) reek of “provokatsiya.”

According to the BBC’s Russian media analyst Stephen Ennis, the word “provokatsiya” directly translates to “act of provocation.” But, Ennis notes, “in a media context [the word] often refers to a hoax designed to embarrass or discredit someone.”

It’s unclear who the target of this alleged hoax would be or what its general contours might suggest. It’s doubly unclear who–out of Jones and West–would be hoaxing who under such a scenario. Law&Crime reached out to Garland for some clarity on this matter, but no response was forthcoming at the time of publication.

Garland’s further tweets on the matter offered some insight as to his thinking. He posted an article about West’s November 2016 meeting with a Russian fashion designer in Moscow. This tweet was captioned, “AHEM…Note the date: Nov 15, 2016.”

After that, Garland posted a tweet containing a link to an article about West’s much-derided 2016 meeting with President-elect Donald Trump at Trump Tower in Manhattan. This tweet made much out of the date that meeting took place. Garland wrote, “Two days prior, November 13, 2016: Kanye meets at Trump Tower before departing for Moscow. 🧐”

And that was the end of it. Two tweets amidst the dot-connecting briefly addressed critics of Garland’s latest salvo. One tweet suggested maybe Kanye West is just an asshole. Another tweet taunted his critics with a challenge:

Call this conspiracy theory if you dare: you ain't got a better explanation than this, and my sources tell me this is going to come out. So see you in a year. We'll circle back. 😎

Law&Crime will definitely circle back on this one as well.

[image via TIMOTHY A. CLARY/AFP/Getty Images/screengrab/Twitter]