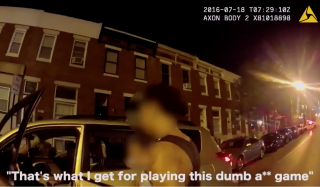 You can watch the body camera video below:

#PokemonGO is not all fun and games. Here is a video of a distracted driver who struck one of our cars. #PlaySafepic.twitter.com/kOTfbTcILo

“That’s what I get for playing this dumb a** game,” the driver told the officers in the body cam video.

While no injuries were reported, the Baltimore Police has urged people playing the game to use caution.

“It’s a game, but it’s not a game when you’re behind the wheel. This could have easily, easily been a tragedy,” said public information officer T.J. Smith at a press conference according to ABC.

This latest accident is one of a string of mishaps and crimes that have taken place as a result of Pokemon Go. If you want to learn about how to keep yourself safe, read Lawnewz’s article here or watch our Facebook Live below.