Father Charged for Killing Daughter Who Was Actually Shot by Police 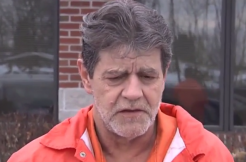 Ciara Meyer was shot and killed by a police officer Jan. 11, but it’s her father who was arrested. Donald Meyer, 57, was charged with criminal homicide and involuntary manslaughter Thursday.

A constable for Perry County, Pennsylvania had come to their house to serve an eviction notice. Things escalated tragically when Meyer pulled a gun from the officer, according to authorities. In turn, the officer shot Meyer. The bullet pierced his arm, and struck the 12-year-old Ciara, ending her life.

Perry County authorities argue that their constable was emotionally distraught, but not liable for the death.

“It’s been described to me [the constable was] just completely distraught, certainly something that he didn’t want to see happen,” said Perry County District Attorney Andrew Bender, according to CBS 21.

Bender says it’s Meyer who is responsible since he drew his weapon first. Authorities say he was committed in 2011 for mental health issues. That detail would keep him from owning a gun under Pennsylvania law.

“He purchased weapons since that time, but he did so by falsifying the firearm transfer action record and wasn’t providing truthful information,” Benders said, according to CBS 21.

Donald Meyer remains livid. “They’re responsible for the murder and shooting of my daughter and me, and now it’s a big cover up,” he said, according to CBS 21. “They’re charging me with a felony for protecting my family?” He said he was planning to contact the ACLU and NRA when officials give him the opportunity to make phone calls.

Criminal homicide doesn’t require direct action in Pennsylvania. On one hand, an offender could knowingly cause the death of another human being. But they’re also considered just as culpable if their actions are ruled reckless or negligent. In this case, it’s been classified as involuntary manslaughter.