The propaganda machines are at it again, and they’re using that old reliable subject – unborn babies—to rile people up without any actual facts. 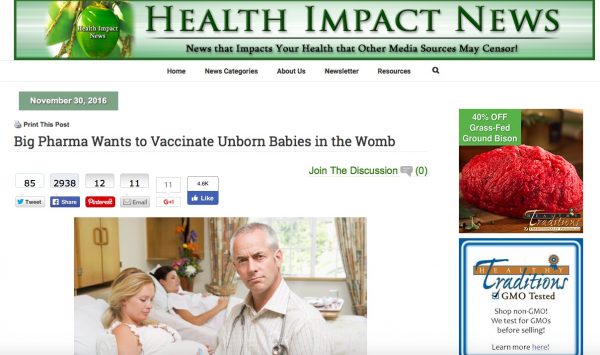 The article scares readers into believing that while we’re all focusing on Trump’s star-spangled “dead cat” on Twitter, Congress is about to force needles through the bellies of pregnant women and into their gestating children. The article focused on proposed language in Senate Bill 2742 (currently before Congress), which reads:

It went on to provide an inflammatory and irresponsible interpretation of that language:

“[T]his provision may be intended simply to increase vaccinations given to pregnant mothers. If a developing child is considered a “person” eligible to receive vaccinations, the vaccine industry could begin to develop more vaccines intended specifically for children in utero.”

In reality, the language was part of a section titled “National Vaccine Injury Compensation Program” (heading conveniently left out by the hysteria machine) and read, in proper context, as follows:

“(3) VACCINES RECOMMENDED FOR USE IN PREGNANT WOMEN.—The Secretary shall revise the Vaccine Injury Table included in subsection (a), through the process described in subsection (c), to include vaccines recommended by the Centers for Disease Control and Prevention for routine administration in pregnant women and the information described in subparagraphs (B) and (C) of paragraph (2) with respect to such vaccines.”.

(c) Petitioners.—Section 2111(b)(2) of the Public Health Service Act (42 U.S.C. 300aa–11(b)(2)) is amended by adding “A covered vaccine administered to a pregnant woman shall constitute more than one administration, one to the mother and one to each child (as such term is defined in subsection (f)(2)) who was in utero at the time such woman was administered the vaccine.” at the end.”

Anyone with experience reading statutes would understand that this section is clearly meant to provide legal standing for a fetus (or a person who was a fetus at the time of impact) in the event that litigation results from a vaccination. Such a clause eliminates a sort of loophole that sometimes exists when it comes to lawsuits involving pregnant women and developing fetuses. By considering a fetus a “person,” in the way this statute does, it ensures that a negligent vaccine manufacturer couldn’t skip out on liability based on an argument that it only harmed a “fetus” and not actually a “person.”

It’s far from unusual for various groups to create panic over “harming the unborn” for their own purposes, and Health Impact News’ article is par for the propagandized course. But what’s even more alarming is the lack of coverage the underlying bill has received within media at large. Neither Fox News nor CNN nor MSNBC has covered this legislation in any detail, despite its being fast-tracked through Congress.

The bill, known as “21st Century Cures Act,” is an enormous and complex piece of legislation likely to effect major changes in the National Institutes of Health and the Food and Drug Administration (“FDA”). The primary purposes of 21st Century Cures is to increase funding for medical research and streamline FDA approval for new drugs and devices, and it’s been the subject of an inordinate amount of lobbying. The bill is so complex that several portions (including Senate Bill 2742, discussed earlier) have been broken off and put forth as independent legislation.

The main bill, the 21st Century Cures Act, has bipartisan support – but is still pretty problematic. On one hand, it has some fantastic-sounding provisions, such as funding every state with $1 billion to fight the opioid crisis, and a $4.8 billion budget for three ongoing major research programs. On the other hand, the bill would pave the way for the pharmaceutical industry to roll out new drugs and devices easier than ever before, and would minimize requirements for doctors to disclose funds received from drug companies. Opponents of the bill, such as Elizabeth Warren and Bernie Sanders, argue that such concessions are proof that greed-obsessed big pharma has “hijacked” the bill.

The 21st Century Cures Act surely isn’t all good or all bad. But it is absolutely something to which ordinary Americans should be paying attention. It’s telling that today, CNN’s top “health stories” were “The president’s diet and what it says about America,” and “What American presidents ate over the years,” but there wasn’t even a mention of the thousand-page health-related law Congress is about to pass. Sure, this stuff may not fit neatly into 140 characters, but that doesn’t mean we are free to ignore it.