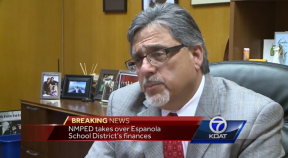 The state Attorney General’s Office on Thursday filed a lawsuit against the Espanola Public Schools District in Rio Arriba State District Court to force the district to comply with an open records request sent months ago.

Kenneth Stalter, a lawyer with the Attorney General’s Office, said it has taken the district more than six months to provide 1 percent of the documents requested.

“At that pace, it would take five years to inspect even 10 percent of the requested documents. This is unacceptable,” Stalter wrote in a letter to district officials.

The school district’s records custodian, Crystal Lea Garcia, said 200,000 pages have been identified that are sought by prosecutors but that district officials have reviewed 1,700 and believe those are the only documents that need to be given to the prosecutors.

Contacted by The Associated Press, Espanola Superintendent Eric Martinez forwarded Garcia’s district letter mentioned in the lawsuit. “This document was sent to the Attorney General’s office in a timely manner,” Martinez said in an email. “Be advised the records requested by the AG are for the past six years as indicated in the letter.”

The Attorney General’s Office is seeking documents related the to the troubled school district’s finances.

The state Public Education Department took over the finances of the Espanola school district in November after finding budget irregularities.

The department also warned Martinez to fix other problems, including the high-profile rehiring of the high school’s basketball coach, who was accused of verbally abusing players.

According to the state documents, Martinez pushed and grabbed players, yelled at them and threw chairs and kicked bleachers. Documents say he also mocked shorter players and compared one struggling player to his father who had killed himself.

The previous superintendent had fired Espanola Valley High School boys basketball coach Richard Martinez in April and then resigned when the school board did not support the termination.