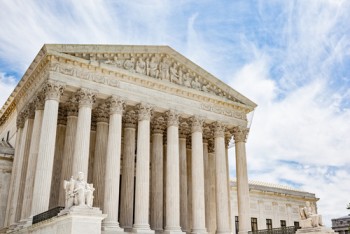 A new study published in The Cornell Law Review examines the Supreme Court’s practice of appointing lawyers to argue some cases that will come before the Court.  These so-called “amicus invitations” are handed out about once each term, typically in cases where “one party to a case declines either to participate at all or to advance a particular position before the Court.” The study reviewed the backgrounds of the last 59 amicus invitees and found both minorities and women to be underrepresented in comparison to the percentages both groups account for in terms of overall representation before the Court. Additionally, the study found that nearly all of the recent appointees previously served as law clerks at the Supreme Court.

Katherine Shaw, the author of the study and law professor at the Benjamin N. Cardozo School of Law, spoke about this issue as well as some of the other findings in an interview with The New York Times on Monday.

For example, an analysis published last week by The National Law Journal reveals women attorneys argued 23% of the cases heard by the Supreme Court in this past term (the study notes the recent average for women is approximately 18%).  Furthermore, non-white minorities have argued approximately 10% of cases before the Court between 2000 and 2012, according to another study found by the Times.

In comparison, Shaw’s study reveals that only 10% of amicus invitations have gone out to women attorneys and only 5% to minorities.  The study does note, however, that women have been appointed to argue 23% of the cases over the past decade — a number much more in line with the overall percentages.

An amicus invitee receives no pay and it takes long hours to prepare a legal brief  and for oral argument. Nonetheless, Prof. Shaw argues that the prestige and career advancement opportunities that come with an appointment can sometimes be invaluable.  As such, she argues that the opportunity should be available to more than just a chosen few.

“Giving a young lawyer early in their career this opportunity is an affirmative good,” Shaw told the Times, “but I just think there should be a broader pool from which the justices draw when they’re handing it out.”

Prof. Shaw argues the Court should accept applications from potential invitees in an effort to open the process to more than attorneys.

“A more open application process would inevitably result in a more diverse pool of advocates,” Shaw said. “It would expand it beyond individuals with whom the justices have some existing personal relationship, which does feel something like patronage.”

There are no rules governing how the Court appoints attorneys to argue cases, so it remains to be seen if the Court will implement any changes.  And if recent comments of some Justices are any indication, it seems unlikely that any significant changes in the process will be forthcoming.

In 2015, Justice Elena Kagan reportedly said she is all for having a limited pool of attorneys that argue before the Court.  “We hope [that trend] will continue,” Kagan said, while arguing “good lawyering helps for better decision making.”