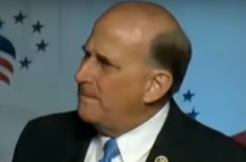 Rep. Louie Gohmert (R-Texas) should get his facts right. On Friday, he used suicide rates among veterans to make a misleading, inaccurate argument against sexual reassignment surgery.

He was criticizing a proposal that’d allow the Department of Veterans Affairs to cover sex reassignment surgery for transgender patients.

He’s wrong. Increasing veteran suicide rate by 20 times? Where did he get that number? Even when I account for the hyperbole, he is just wrong.

Let’s start with rates of suicide attempts among transgender people. The numbers are ridiculously high, but aren’t linked to sex reassignment surgery. They’re linked to harassment.

In 2010, the National Center for Transgender Equality and the National Gay and Lesbian Task Force published a study on this. Forty-one percent of transgender respondents reported an attempted suicide. While accounting for other variables that are involved in taking one’s life, investigators discovered discrimination played a huge role.

“Those who were bullied, harassed, assaulted, or expelled because they were transgender or gender non-conforming in school also reported significantly elevated levels of suicide attempts (51% compared with 41% of our sample as a whole),” they said.

Researchers at the Williams Institute found that many transgender respondents were ostracized by family members (57 percent), discriminated at work (at least 50 percent), bullied at school (at least 50 percent), reported victimization by law enforcement (at least 57 percent), and experienced homelessness (69 percent). The findings related to healthcare aren’t even concerned with sex reassignment surgery, just general treatment. Sixty percent said doctors or other health care providers simply refused to take care of them.

Then there is the matter of people who have served in the U.S. armed forces. I led with the example of transgender people because this is only recently publicized. But the situation really isn’t better for American vets.

The V.A. itself says that from 2001 – 2007, deployed vets of the Iraq and Afghanistan wars had a higher suicide risk compared to the U.S. general population: 41 percent higher. For non-deployed vets, that number shot up to 61 percent. In those six years, 21.3 percent of all deployed veteran deaths were by suicide. That number is 19.7 percent for non-deployed deaths.

A 2012 finding showed that 22 vets die by suicide each day, and as of early 2016, the suicide rate remained 50 percent higher than for civilians. The V.A. continues to tackle this problem publicly, but a 2015 report by The Washington Post’s Michelle Ye Hee Lee found that research on this subject isn’t very diverse. She argued the “22 a day,” as used, is often reported without context, and is based on incomplete research.

There isn’t that much data and explanation surrounding military suicide rates. Nonetheless, available research might be telling. In 2015, the V.A. said up to 20 percent of Iraqi war vets suffer or have suffered from post-traumatic stress disorder. It’s 12 percent for vets of the Gulf War, and possibly as much as 30 percent for Vietnam vets. Compare that to the general population, who suffers it at a 7 – 8 percent rate.

Even retired Army Captain Stacy Bear (who claimed military suicide rates are vastly overestimated) has said vets face special problems civilians don’t, and treatment must be specific to them.

“The challenges of adjustment and transition, post-traumatic stress, traumatic brain injuries, and physical disabilities, all need to be addressed especially as these things result in barriers to education, employment, health care, and overall individual well-being,” he said in a June, 2015 article. “Many of these needs are being met by a combination of different veteran-serving nonprofits and V.A. support. Unfortunately, there are still gaps in the system.”

So, Rep. Gohmert, when a transgender veteran commits suicide, successful sex reassignment surgery won’t be the reason. It might be because their mother froze them out. It might be because they lost a friend to an IED. It might be due to discrimination from other soldiers, or problems struggling with a catastrophic injury sustained in battle. But a treatment that improves their lives? No.

Helping people in need means we need to know what caused their problems. We can’t do that if we rely on false hyperbole. Rep. Gohmert, please do your research before you spread more misinformation.
–