Democrats Are Caving To Trump’s Demand For Border Wall 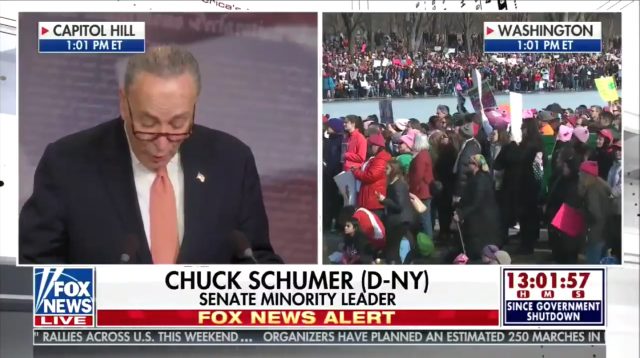 Multiple high-ranking congressional Democrats have signaled that their party will give in to President Donald Trump‘s demand to build a wall along the U.S.-Mexico border.

As the nascent government shutdown forces Democrats outside of their comfort zone, baser instincts are kicking in. The putative opposition party has experienced hours worth of a government shutdown and their biological tendency toward reaction is making them realize harsh truths about themselves and the nation’s capital.

All of this means Democrats are shook. Sure, such occurrences might make the average person shrug with ambivalence–and the fact that DACA is popular while the wall is not popular might also suggest a position of strength–but Democrats exist by virtue of their mastery of collusion.

The supine position is more natural for members of the Democratic Party anyway, so they’ve apparently decided the congressional gym cannot run out of towels any longer.

It’s not about a wall. We’ll build him a wall. Tell us how high you want it. But free the dreamers.

Earlier it was reported that Senate Minority Leader Chuck Schumer (D-NY) thoroughly caved to many of Trump’s demands during a backroom tete-a-tete between the two New Yorkers–and even offered some tantalizing proposals to Trump apropos of nothing to do with immigration.

Many hoped reports of Schumer’s knee-bending were false. But, as if on cue, the man who represents the collective wishes of Senate Democrats rushed in to confirm his party’s commitment to nothing-in-particular-so-long-as-something-gets-done. Schumer noted:

We went to the meeting and had a long and productive discussion. I told the president we Democrats were willing to fund the military at the highest levels in history–far above even his budget request. I reluctantly put his wall request for the southern border on the table. It was his request. We left the meeting having agreed to try for a short term CR that would keep everyone at the negotiating table for a few more days.

Aside from a reversal of fairly recent rhetoric, the construction of a wall along the U.S.-Mexico border is nothing new for congressional Democrats or for the Democratic Party in general.

In 2006, the U.S. House of Representatives and U.S. Senate voted overwhelmingly in favor of the Secure Fence Act–which called for a 700-mile border wall between the U.S. and Mexico. Many prominent Democrats voted for that border wall bill–including the party’s two most recent standard-bearers: Hillary Clinton and Barack Obama.

In the Senate, only one Republican, one independent and 18 Democrats voted against the Secure Fence Act.

Oppositely, the Democratic Party’s newfound affection for undocumented immigrants is now being outed as the political posturing of a new generation of Hashtag Resistance hucksters in a long line of grifts and grafts practiced by the still-Tammany-like majority within the Democratic Party.

After all, it’s not for nothing that President Obama was known as the Deporter-in-Chief by immigrants rights activists; Obama personally oversaw a ramped-up deportation regime which used the state’s monopoly on violence to remove more human beings from the United States than all of his predecessors–combined.

The immigration debate can therefore be distilled thusly: