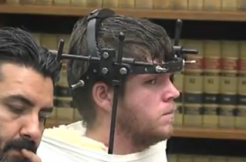 Court feed from local affilaite. We were not present for this pre-trial hearing.