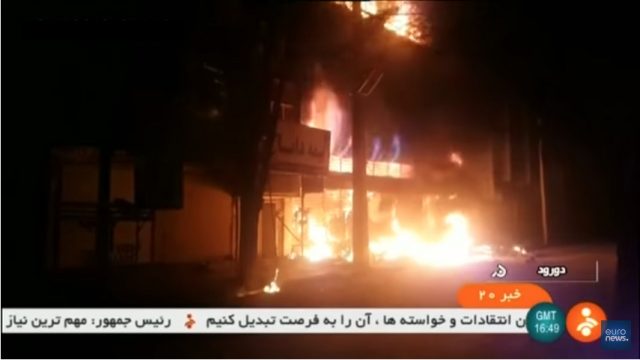 The centrist legal blog Lawfare yesterday called for the United States to arm unknown and unspecified members of the “Iranian opposition” with violent weaponry to be used against the Iranian government.

Written by Stewart A. Baker, the brief blog post is titled “Best Served Cold: Responding to the Iranian Protests.” To state it plainly: Baker is calling for the direct support and advocacy of terrorism.

The overarching point is easy enough to discern from the title alone. What Baker wants is not to aid the Iranian protesters in their legitimate demands for more and better from their leaders–but revenge against the Iranian government for perceived slights against U.S. troops during the 2003-2011 occupation of Iraq.

Baker recites an inaccurate and context-free history of Iranian involvement in Iraq. He writes, “Remember, when the Iranian regime decided it didn’t like U.S. activities in Iraq, it found considerably more direct ways to express its disapproval. It just started killing American troops.” This is not how anything happened in Iraq, but it is a convenient rhetorical launching pad to obtain the Iranian deaths for which Baker sorely yearns. He then explains how to achieve his desired result: improvised explosive devices known as an explosively formed penetrators (“EFPs”).

The New York Times offers a helpful explanation of EFPs from a 2013 article about the Iraq War:

What makes E.F.P.’s so deadly is that they form “slugs” at detonation that maintain their shape over distances of over 100 yards or more, traveling at speeds of nearly a mile per second. This allowed insurgent forces to hide these weapons far from the road, better camouflaging them and making them far more deadly.

Baker returns once more to his false historical narrative, writing, “Three hundred Americans died—and many more were grievously wounded—because Iran introduced [EFPs] into the Iraq insurgency.” As the same Times article referenced above notes, this isn’t quite true.

Rather, Iran is alleged to have at one point passed EFP technology on to Hezbollah (while likely, an unproven assertion) which then passed EFP technology on to the Iraqi insurgency (a similarly unproven assertion.) And, let’s note: these assertions about Hezbollah, Iran and the Iraqi insurgency were all cobbled together by the same U.S. intelligence agencies which often get the Middle East spectacularly wrong.

Next, Baker finally gets to his point. He writes:

EFPs are particularly effective in the hands of lightly armed opposition forces that face well-armored government troops. EFPs are equalizers. Buried in the road and used against carefully selected targets, their impact on morale can be devastating.

If anyone in the world deserves to understand just how devastating, it’s the folks who have used their monopoly on guns and tanks to kill protesters, especially since they’re the same folks who brought EFPs to the streets of the Middle East.

Again, in no uncertain terms, what Baker appears to be advocating here is: (1) terrorism; and (2) various violations of international law. Let’s explore both in turn.

1. Baker Appears to be Advocating Direct Support For Terrorism

There is currently no internationally recognized armed conflict occurring between state actors in Iran. Therefore, use of military-style violence by non-state actors would simply be criminal–and will likely be prosecuted under Iranian domestic law. Furthermore, such EFP attacks–by Iranian protesters against the Iranian government–would qualify as terrorism, too.

While there is no internationally-accepted definition (legal or otherwise) for terrorism, certain definitions are helpful in understanding what exactly is being argued for in Baker’s piece.

The U.S. defines terrorism at 22 U.S.C. § 2656(f)(d)(2) as “premeditated, politically motivated violence perpetrated against noncombatant targets by subnational groups or clandestine agents.” Let’s break this definition down a bit.

Here, the violence suggested by Baker is clearly premeditated because he’s advocating said violence on a popular blog for natsec-brained lawyers. Next, even though Baker’s rationale is less than noble–and in fact personal, petty and factually wrong–it does have a political motivation: avenging the deaths of U.S. soldiers.

The term “subnational” in the above-quoted section refers to non-state actors (such as the protesters.) And, even if Baker’s vaguely-defined Iranian “government troops” were the target, there’s still no recognized conflict/combat situation that would allow for the legal use of force against them.

Each of the above three violations would certainly be implicated by Baker’s suggestion to introduce EFPs into an Iranian domestic dispute. And, though the U.S. is a rogue state which does not believe itself bound by the post-World War II strictures, treaties and trends of international law–while the U.S. does seek to force other countries to those same strictures, treaties and trends–such violations would still be violations.

Response to Baker’s piece was largely negative. And Lawfare‘s editor Benjamin Wittes felt the heat so much that he penned an editor’s note yesterday evening. Wittes writes, in relevant part:

It is perfectly acceptable, in our view, to analyze how the U.S. government should best support the Iranian protest movement, including the possibility of covert action, and even the possible supply of weapons to revolutionaries or insurgents. The problem with the post is that it does not treat the issue with the soberness or seriousness it requires. It contains no legal analysis and very little, if any, policy analysis…And it can plausibly be read to advocate violence with potentially indiscriminate weapons in an emotive, too-personal fashion, and without any argument other than revenge.

No. The only problem for Wittes and his ilk is that Baker didn’t use the proper legal citations or analyze the issues involved in eviscerating international law, supporting terrorism and promoting illegal U.S. interventions. Baker failed because didn’t use the right tone or jargon. He was simply too personal in the way he let the mask hiding bloodlust slip. And that’s the real crime.