Trump’s Plan for Wall has Taxpayers Footing the Bill, Claims Mexico Will Reimburse 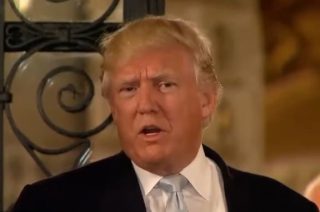 In what initially appeared to be another shift from his campaign platform, Donald Trump‘s plan to build a wall along the Mexican border and have Mexico pay for it may not be as simple as the President-elect claimed before the election. House Republican officials say that Trump’s transition team let them know that the new administration will look to get Congress to designate government funds to build the wall. Trump himself then tweeted Friday morning that Mexico would then reimburse the U.S. for the expense.

The dishonest media does not report that any money spent on building the Great Wall (for sake of speed), will be paid back by Mexico later!

Trump says that he plans to have American taxpayers shell out the billions of dollars needed for the wall “for sake of speed,” and that Mexico will still ultimately pay for it “later.” To be fair, while Trump touted that Mexico will pay for the wall while he was campaigning, he did say in the weeks leading up to the election that his plan was for Mexico to reimburse U.S. costs, and not lay out the money up front. Trump’s morning tweet indicates that this is still his plan of action.

Of course, there are two huge potential problems with this. First, Congress could just say no. While Republicans do control the House and Senate, that does not necessarily mean that enough lawmakers will be in favor of appropriating billions of dollars for this project. Second, Mexico could say no to reimbursements after the U.S. already spends the money. Mexican leaders have yet to say that they are on board with this plan, so shelling out taxpayers’ dollars could be risky if Trump doesn’t end up convincing them to take on the financial burden.