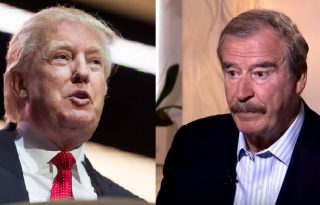 Maybe this is how he plans on getting Mexico to pay for the wall? Former Mexican President Vicente Fox tweeted over the weekend that he received a fundraising email from none other than Donald Trump. The message asked for a “generous contribution” towards a $20 million fundraising goal for the end of September.

Today I received an email from @realDonaldTrump asking for money…this smells like defeat. Of course I had an answer for him… pic.twitter.com/VbtjZm5eRm

Fox, who was the Mexican President from 2000 to 2006, also claimed to have received a solicitation from the Trump campaign on September 9, and he had some strong words for the Republican candidate.

@realDonaldTrump, I won’t pay for that f***ing wall! Also, Campaigning in Mexico? Running out of money and friends? pic.twitter.com/P5iyZsQzUa

It would certainly take more than a couple of tweets to show that Trump actually sought out donations from the former Mexican leader, but it doesn’t look good. If Fox’s posts are legit, it could be trouble for The Donald. The emails that Fox posted appear to be from the address [email protected] According to The Washington Post, that domain that has been used by the Trump Make America Great Again Committee, which is a joint fundraising committee for the Republican National Committee and the Trump campaign. The domain is listed as being registered by attorney Dan Backer, who told the Post, “the mere presence of an email of a non-qualified contributor on a list does not equate to any intent to solicit a person, even a foreign individual.” It’s unclear exactly where the email addresses on the potential donor list came from.

But this isn’t the first time Trump has gotten flack for this sort of thing. Far from it. Soliciting, collecting, or receiving monetary donations for an election from foreign nationals for is against federal law (52 USC §30121(a)(2) to be precise). And Trump has been the subject of Federal Election Commission complaints for doing just that over and over again. In June, the Campaign Legal Center, Democracy 21, and the American Democracy Legal Fund (ADLF) filed complaints with the FEC alleging that Trump sent fundraising emails to members of several countries’ parliaments, including Scotland, Iceland, and Australia. In August, the ADLF alleged that Trump continued to solicit from Australian and UK politicians after the first batch of complaints had already been filed.

Now, Trump hasn’t been found guilty of anything, but if all of these allegations are true, he might just be the Anthony Weiner of foreign fundraising. No matter how many times he gets caught, it seems he just can’t stop.

This article has been updated with information regarding the domain that sent the emails.

[Image of Donald Trump via Shutterstock; screengrab of Vicente Fox via Fusion]