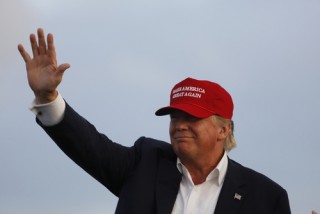 In order to present a unified party during the 2012 Republican National Convention, the delegates approved a little-known and very obscure rule change that could potentially give Donald Trump a boost at the 2016 convention and hurt his opponents. The rule requires a candidate to win the majority of the delegates from eight different states in order to win the nomination. Without going into too much detail, the reason for the rule change was to keep Ron Paul from getting his name called on the convention floor (Paul had actually done pretty well delegates-wise). The Republicans wanted to show a party unified behind one candidate. An unintended consequence of this rule (if they keep it) for the anti-Trump Republican establishment is that it could help secure Trump’s nomination. By requiring eight states to be nominated, the rule could whittle down the candidates whose names can be called and voted on during the convention.

“It looks like this 8 state rule is to (Trump’s) advantage — because he is winning the most states (5 so far). If he is the only one that is placed in nomination and the convention votes, it is harder to bust open the convention and get delegates moving away from him,” Elaine Karmack, a senior fellow at the Brookings Institute, told LawNewz.com.

In 2008 for example, the RNC only required a candidate to win 5 or more states to be called for nomination. The lower the threshold, the more candidates (theoretically) could have their name called for voting. Of course, if your name is called during the roll call vote, you are allowed a nominating speech, and all that. It’s a big deal.

“[B]umping that control threshold up from just one more delegate than your next nearest competitor to having to control half of the delegates in a state’s delegation plus one is a potentially significant change… This is exactly the type of unintended consequences a party gets when it makes plans for a nomination and convention four years ahead of time. Things change and in ways that are difficult to plan for so far out,” said Josh Putnam, an election law expert and University of Georgia lecturer, who posted on his blog.

Here’s something to remember, the delegates vote on the 2016 convention rules BEFORE they vote. Well-known election law attorney Ben Ginsberg, who was Mitt Romney’s General Counsel during his 2012 campaign, pointed out that the 2012 rules don’t necessarily carry over to the 2016 convention.

“The 2016 Rules Committee and Convention will have to put some standard in effect for the nomination requirement, but the specifics (especially the number of states needed) is entirely up to the 2016 convention,” Ginsberg told LawNewz.com. In other words, the delegates could totally change the rules when they get to the convention. If they lower the state threshold back to five that could help Trump’s opponents.

“The delegates can do any damn thing they want,” said Karmack.

If Trump comes to Cleveland with a majority of delegates (1,237 or more), all of this will be much tougher. But, as I’ve reported before, the Republican National Committee rules are subject to change, so literally anything could happen.