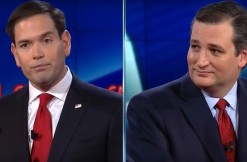 It’s getting to the point where “birther” allegations are part of the political process. A Florida man just tried—and failed—to get Republican presidential candidates Ted Cruz and Marco Rubio kicked off the ballot for the March 15 Florida primary. A judge dismissed his lawsuit Friday.

That Florida man, Michael Voeltz, argued that neither candidate was a natural-born citizen. After all, Cruz was born in Canada. As for Rubio, he was born in Miami to immigrant parents from Cuba.

“You can attain citizenship by an act of naturalization or by birth,” Voeltz, who represented himself and is not an attorney, said in court. He argued that a person could not be “natural born” and “naturalized” at the same time.

Give us a minute to process this. In what way is Rubio not an American citizen? He was born in the United States, though Voeltz argued that he was made a citizen without getting put through a proper naturalization process. Even Cruz’s awkward status is pretty stable, since his mom was an American citizen. That probably makes him a “natural born citizen,” though his situation isn’t settled law yet. In any case, no attempt to kick him off any primary ballot has been successful at this time.

Broward County Judge John Bowman dismissed the suit, saying Voeltz made a mistake by removing the Florida Secretary of State, Ken Detzner, as a defendant. After all, it’s his office that runs the Division of Elections, which in turn handles the ballot. In other words, if Voeltz wanted someone to kick Cruz and Rubio off the ballot, he should’ve been suing the right someone.

For their part, attorneys for Cruz, Rubio, and the Florida Republican Party argued that only the Electoral College or the U.S. Congress can decide who is eligible to be president.

Bowman didn’t rule on Voeltz’s argument on the candidate’s eligibility. The dismissal happened on grounds of a technically. For example, he said the plaintiff wasn’t hurt by Cruz and Rubio being the ballot, and therefore lacked the standing to sue. Voeltz, a registered Republican, refused to say which candidate he’s supporting, when asked in court.

He filed a similar lawsuit against President Barack Obama in 2012.