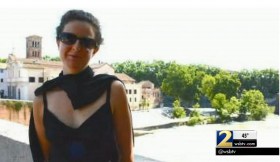 There’s been an arrest in connection to the murder of Jessica Colker, 39, an American vacationing in Grenada.

The Royal Grenada Police Force said Wednesday that David Martin Benjamin, 27, has been charged, NBC News reports. So far, cops are reportedly mum on details, except that Benjamin will appear in court later in the day.

Colker had been at the beach with her husband when police say she was killed by a man using a machete-like instrument. It was a reportedly brutal attack, which possibly involved a rape.

“She was just a beautiful soul. Such a great friend,” according to a friend. An employee at Children’s Healthcare of Atlanta, Colker was helping set up a fundraiser for refugees.

Grenada police had been questioning Benjamin for the killing from almost the get-go. He had been released from prison in December, after the rape statue in Grenada was changed: The maximum penalty was dropped from 35 years to 15 year. Benjamin had been serving a term for child rape before getting his freedom.
–