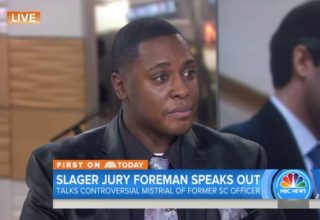 On Monday, the murder trial of former police officer Michael Slager ended in a mistrial. Slager, who is white, was caught on video shooting Walter Scott, an unarmed black man, after a traffic stop. The mistrial came after the jury submitted a letter to the judge on Friday, saying that there was one juror who was unwilling to convict. When the mistrial was declared a few days later, media discussed the one holdout who apparently prevented a unanimous decision. The jury foreman, however, now says that’s not what happened.

Juror Dorsey Montgomery went on “The Today Show” with his attorney on Thursday to discuss his experience with the jury deliberations. Montgomery said that while there was that one person who did not want to convict, there were five other people who were undecided.

Montgomery himself said that he was ready to convict Slager, but not for murder. He felt that Slager had “a brief disturbance in reason” when he shot Walter Scott, which Montgomery believed made voluntary manslaughter more appropriate.

Host Matt Lauer asked Montgomery, the only black member of the jury, if he thinks race played a role in the jury’s decision. “I do believe some jurors might have had that in their mind,” he said, “but the majority of them didn’t have anything in reference to race that may have played a factor in their decision.”