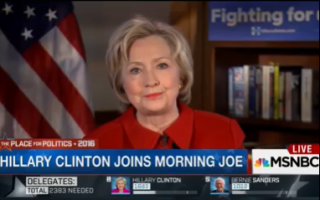 In an appearance with MSNBC’s Morning Joe on Wednesday, Democratic Presidential candidate Hillary Clinton slammed rival Bernie Sanders on a number of issues, one of them being guns. Clinton cited a recent interview Sanders gave with the editorial board of the New York Daily News, where he discussed his positions.

First, the former Secretary of State talked about how Sanders didn’t seem to have researched the main aspects of his own platform, such as breaking up big banks. But she really took issue with his stance on gun manufacturers.

Calling the issue “one of my biggest contrasts with Senator Sanders,” she railed against his position saying that gun manufacturers should not be held liable for mass shootings like Sandy Hook. Clinton said it is “unimaginable” that Sanders can place the rights of gun makers over the parents of children killed in a school attack. In the Daily News interview, Sanders said that the victim of a gun crime should generally not be able to sue the manufacturer, but that “gun manufacturers and gun dealers should be able to be sued when they should know that guns are going into the hands of wrong people.”