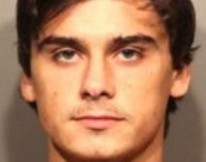 The alleged victim is a Cornell student, too, as reported by Syracuse.com. She reportedly said the attack happened at a Psi Upsilon frat house early Sunday.

The police statement can be read here:

Even though Ballinger, 21, wasn’t mentioned in early media reports, the university acted fast. Psi Upsilon was put on interim suspension Monday, according to the Ithaca Journal. That means the frat can’t do anything but handle the “operation of its residence.” They’ve been suspended before, in 2015 on drug accusations. Even so, those allegations didn’t stick.

Ballinger was arraigned in Ithaca city, and sent to the Tompkins County Jail on $25,000 cash bail or $50,000 bond. His next court date is Feb. 9, a preliminary hearing.