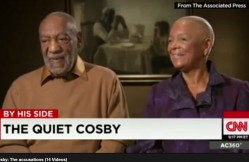 Camille Cosby asserted marital privilege time and again as she was deposed for a lawsuit filed against her husband Bill Cosby over sexual assault allegations. Cosby’s wife of 52 years refused to answer at least 98 questions under oath during her videotaped deposition, according to released District Court transcripts.

Seven women—Barbara Bowman, Joan Tarshis, Louisa Moritz, and Angela Leslie, who joined a lawsuit brought by Tamara Green, Therese Serignese, and Linda Traitz—filed for defamation against Cosby last year in Massachusetts. Camille Cosby was compelled to participate in the February deposition, but the judge ruled Cosby’s wife could assert marital privilege—which affords protections and confidentiality to marital communications—and decline to answer questions, and boy did she!

The deposition was tense with often combative exchanges between Camille’s lawyers and the attorneys for the plaintiffs. Camille was required to sit for a deposition in front of six attorneys for questioning.

“Privilege. Do not answer.” This phrase, said ad nauseum by Camille’s attorney, Monique Pressley, must be ringing in the ears of Joseph Cammarata, the attorney for the plaintiffs, who showed elevating frustrating at the persistent privilege assertions made by Pressley.

Cammarata was so frustrated that he threatened to call the judge at one point over what he perceived to be inappropriate instruction by Pressley. “This is – this is outrageous,” he said. Pressley, refusing to back down, said “I’m happy to get the judge on the phone.”

It’s clear that Cosby’s legal team will do their best to ensure Camille’s statements on her husband’s actions remain tight-lipped.