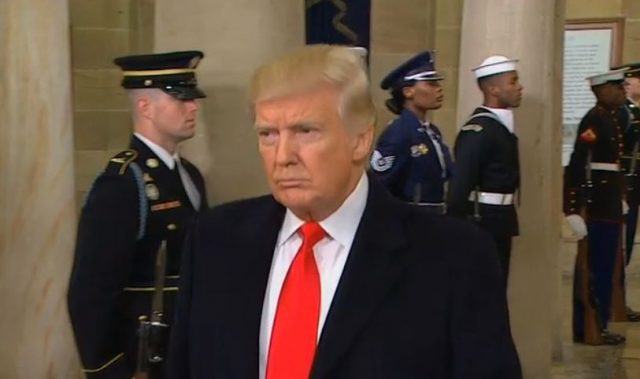 Wednesday morning, President Donald Trump tweeted that after discussing the matter with generals, he will not allow transgender people to serve in the military “in any capacity.”

After consultation with my Generals and military experts, please be advised that the United States Government will not accept or allow……

….Transgender individuals to serve in any capacity in the U.S. Military. Our military must be focused on decisive and overwhelming…..

Already, advocacy groups are preparing for legal battles over this declaration, claiming that it’s illegal discrimination.  The ACLU is calling on any affected people to reach out to them for help.

Transgender service members should know the ACLU has your back and we want to hear from you. https://t.co/GpYb3RwP5I

In a statement obtained by LawNewz.com, ACLU senior staff attorney Joshua Block said, “This is an outrageous and desperate action. The thousands of transgender service members serving on the front lines for this country deserve better than a commander-in-chief who rejects their basic humanity.”

Block went on to contradict President Trump’s claim that the ban is justified in order to save on medical costs and to prevent unspecified “disruptions.”

Let us be clear. This has been studied extensively, and the consensus is clear: There are no cost or military readiness drawbacks associated with allowing trans people to fight for their country. …

There is no basis for turning trans people away from our military and the ACLU is examining all of our options on how to fight this. For any trans service member affected by today’s announcement: Please get in touch with us, because we want to hear from you.

Lambda Legal, an organization that provides legal services on behalf of the LGBT community, tweeted this message, expressing confidence that they will prevail over Trump on this issue.

We’re more than ready for this fight, @realDonaldTrump. But the question is, are you? pic.twitter.com/UrnHw6WKDo

Celebrity attorney Lisa Bloom has also entered the fray pledging her assistance in the fight against transgender discrimination.

Transphobe in chief. Deplorable. Let’s litigate to protect the constitutional rights of our trans friends. https://t.co/7U3DPGiXTK

Matt Thorn, executive director of OutServe-SLDN, a group that provides legal services to LGBT members of the military, weighed in as well. “If the president pushes this, we will take him to court,” Thorn told the Washington Examiner. Thorn said that besides the discriminatory nature of the ban, Trump doesn’t even have the authority issue it in the first place. That, he says, would be up to Secretary of Defense James Mattis. “I think this is an overreach,” Thorn said.

Trump appears to be surrounded by opponents on this issue, all ready to take the fight to him. It remains to be seen how strong his defense is.