VIDEO: Teen Who Allegedly Played ‘Knockout Game’ on Elderly Man to Turn Himself In 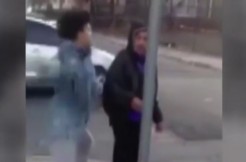 Cops want the teen who reportedly knocked out an elderly man on video. Not surveillance footage. A third person was taping it, telling the suspect, “Knock him out! Knock him out!” It was apparently part of what has been called a “knockout game.”

Fair warning, the video really is disturbing to watch.

The video depicts a young man walking up to an older person on a street corner. The whole while, he’s posturing for the cameraman, then winds up, and hits the alleged victim square in the face. The alleged victim falls down flat, landing on the curb.

It’s not clear how long this video has been circulating online, but the Paterson Police Department (New Jersey) made an announcement about it Friday, with the alleged 16-year-old recorder turning himself in Saturday, authorities say.

Now Attorney Harley Breite told North Jersey the 17-year-old alleged assailant plans on turning himself in Tuesday. Apparently, his client will plead not guilty to the charges, aggravated assault and endangering an injured victim.

“It is unfair for anyone to draw a conclusion without knowing what precipitated the events caught on video,” Breite said.