The NYPD Bragged About Seizing A Handful Of Drugs, So Twitter Lit Them Up 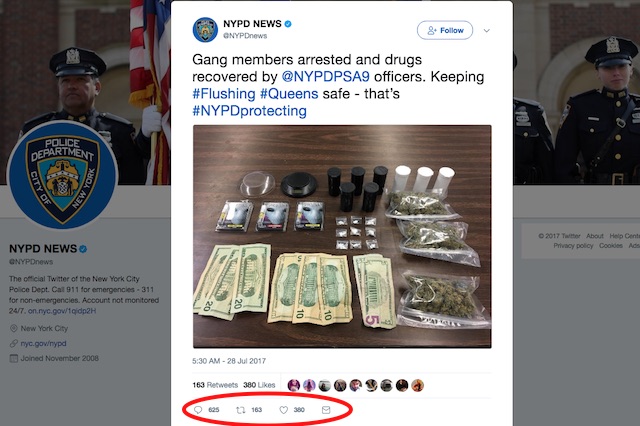 The NYPD learned a lot about Twitter last night.

After tweeting about the arrest of alleged “Gang members” and doing their best impression of The Wire‘s Ervin Burrell by posting an image showing a very small amount of drugs and exactly $100 in cash, denizens of the micro-blogging site took the New York City Police Department’s official account to task for their out-of-all-proportion braggadocio.

Here’s the original tweet-cum-cautionary tale for how not to boast online:

And here are just some of the dragging responses:

Now that college student doesn’t even have the cash to pay the fine.

That’s it?! Yikes. Let’s not talk about my sock drawer…

Wow, real bang-up job guys. What’s that $100 and maybe three ounces of pot? I’m sure the Sinaloa cartel will be outta business any day now.

Apparently their gang leader was sighted fleeing the scene pic.twitter.com/DDkMYpbRc5

And that’s just the start. A cursory glance at the tweet itself shows the NYPD has fallen victim to “the ratio”–-a Twitter phenomenon whereby bad tweets suggest just how soon a user should delete their account based upon the ratio of replies to likes and retweets.

As the ratio here suggests, the NYPD should stop tweeting yesterday.