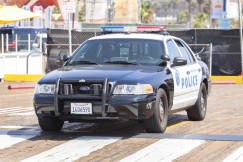 First, there was the woman who broadcasted herself drunk driving on Twitter’s Periscope app. Now, a North Carolina man has been arrested accused of using a taxi as a bank robbery getaway car. One would think he would have at least called an Uber.

Joshua Risard Graves, 22, was arrested Tuesday afternoon by Greensboro police for common-law robbery in connection with an incident at a BB&T Bank.

Graves allegedly walked into the bank, handed a bank teller a note demanding money, got the money and entered a waiting taxi, according to a police news release. Shortly after receiving a phone call from the bank teller, Greensboro police located the taxi and arrested Graves.

The taxi driver has not been arrested and will not be charged in connection with the robbery, according to police.