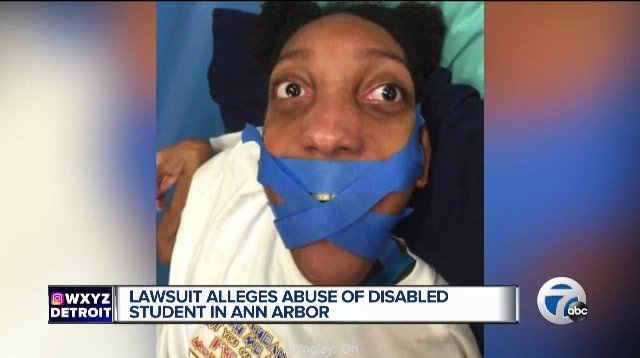 A teacher in Michigan allegedly taped a physically disabled student’s mouth shut in an incident which capped off a series of long-running abuse suffered by that student, according to a lawsuit filed earlier this week.

Rosa Smith is a 26-year-old student at High Point School in Ann Arbor, Michigan. She is diagnosed with cerebral palsy as well as a slate of other disabilities. According to the lawsuit filed by her mother on November 1, Rosa suffered “physical, emotional and psychological harm” while attending said school.

One of the more shocking allegations centers around a photo apparently sent by Smith’s teacher. Nesa Johnson is alleged to have sent a photo of Smith with her mouth taped shut to Smith’s mother along with a text message which read, “Help. She won’t be quiet!!!”

Taping a special-needs student’s mouth shut is appalling in-and-of-itself, but was especially torturous for Rosa, who is physically unable to remove the tape, has trouble breathing and clearing her throat, and breathes out of her mouth…Defendant Johnson’s actions put Rosa’s life in jeopardy. Furthermore, hair and skin were missing from the area of Rosa’s face where Johnson removed the tape.

The lawsuit also alleges that staffers at High Point repeatedly slapped Smith, locked her in the bathroom for long stretches of time, and once spilled hot coffee on her leg which resulted in her skin falling off at the site of the burn.

And, in a plot line all-but plucked out of “American Horror Story: Asylum” it is also alleged that Smith was constantly kept in an overmedicated state. The lawsuit claims, “[High Point staff] intentionally over-medicated Rosa to mollify, pacify and sedate her instead of providing the educational services to which she had a federal right.”

For their part, officials in the Washtenaw Intermediate School District are more or less denying the claims. In a statement provided to the Detroit Free Press, the district said they conducted a full investigation and took “appropriate remedial action” when presented with the Smith family’s allegations of abuse. The statement reads, in part:

[T]he family did not report this, or any other complaint to the district until nearly a year after it occurred. During that subsequent year, the student continued attending school, in the same classroom, with the same teacher.

The lawsuit names the Washtenaw Intermediate School District, Ann Nakon, the district’s supervisor of education, Johnson and two unnamed teachers’ aides as defendants. The Smith family is seeking damages and attorney’s fees in excess of $1 million.