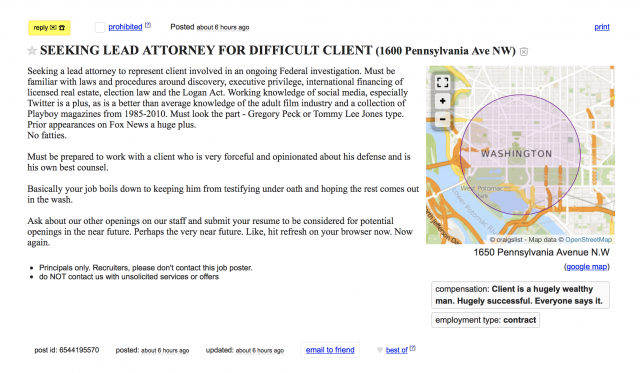 After a rough week for Donald Trump’s legal team, someone identifying as “General John,” (or perhaps it was White House Chief of Staff John Kelly himself) sought to help the president through a witty craigslist ad.

Titled “SEEKING LEAD ATTORNEY FOR DIFFICULT CLIENT,” the position requires someone “familiar with laws and procedures around discovery, executive privilege, international financing of licensed real estate, election law and the Logan Act” for a “client involved in an ongoing federal investigation.”

“Working knowledge of social media, especially Twitter is a plus,” the ad stated. “As is a better than average knowledge of the adult film industry and a collection of Playboy magazines from 1985-2010.”

Other requirements include looking the part and “prior appearances on Fox News [are] a huge plus.”

It won’t be an easy task. In fact, several of the nation’s top lawyers have already turned down offers for the position. According to the ad, the client “is very forceful and opinionated about his defense and is his own best counsel.”

The client did remain unnamed but the address, listed as 1600 Pennsylvania Ave, was rather revealing.

As far as the position’s salary, the ad remained mysterious but reassuring. “Client is a hugely wealthy man. Hugely successful. Everyone says it,” the compensation portion of the ad stated.

For those that do not fit the strict requirements of this position, the ad is confident there will be other openings soon. “Ask about our other openings on our staff and submit your resume to be considered for potential openings in the near future,” the ad read. “Perhaps the very near future. Like, hit refresh on your browser now.”