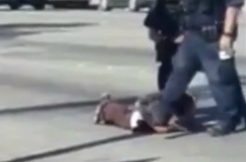 Did a federal officer straight up kick a facedown, handcuffed suspect in the head? That’s what Alex Garcia believes. He saw two law enforcement officials arresting a man in Pomona, California, and said things got brutal. Garcia told CBS-Los Angeles that this pair chased the suspect down, and fired their tasers despite the suspect’s pleas not to.

“One of the officers started handcuffing him,” he said. “The other one was on top of him and socked him on the back.”

Garcia started to record it all, worried that they were using excessive force. That’s when he caught one of the officers apparently kicking the suspect in the head. You can see it here:

So what happened? Is there another explanation for this?

These two officers reportedly belonged to the Federal Protective Service, a branch of Homeland Security that does law enforcement duty on federal property. But so far, no one’s been able to publicly identify the officers or the suspect. We don’t even have the purported reason for the arrest. It’s unclear where these officers are assigned, though it’s worth mentioning that Garcia claimed to see police activity outside the nearby Social Security Administration office.

We’ve touched base with Homeland Security, and are waiting for their statement.
–