10 Dumbest T-Shirts Ever Worn During a Mugshot

Pro-tip: Never wear a stupid t-shirt if you’re going to get arrested. It will make for an awkward, and pretty funny mugshot. These 10 people had the ill fortune to get cuffed while touting some ridiculous apparel. [All pictures belong to the law enforcement agencies that took these alleged crooks in.] 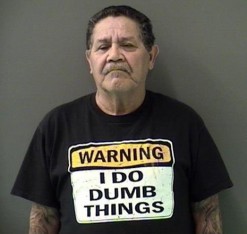 Let’s start this with a simple one. This 66-year-old wore that shirt when arrested for his ninth DWI in Bell County, Texas in March, 2015. If that seems like long criminal history related to drinking, it’s because it is, and the charge was enhanced to a felony because of his record. They do not play around with DWIs in the Lone Star State.

Cuddle You So Hard 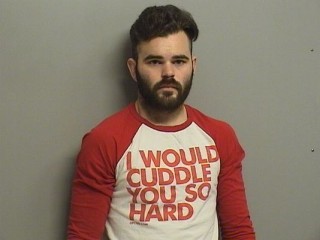 Lordy lord, this 23-year-old was arrested in Tulsa, Oklahoma in February for possession of marijuana with the intent to distribute, contributing to the delinquency of a minor, and possession of drug paraphernalia.

No, Sir, We Will Not Meth with You 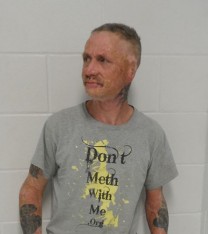 Not that  we’re offering, but this man looks like he needs a hug. In early January, Cops with the Crockett Police Department in Texas said they arrested this 47-year-old waring a “Don’t Meth With Me” shirt on charges of…wait for it…possessing methamphetamine and drug paraphernalia, not to mention endangering a child. And to add more irony to this, the shirt advertises dontmethwithme.org, an anti-drug website.

We Wonder What He Was Arrested For 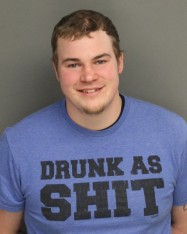 This man wearing this shirt was arrested on a DUI charge back in April, 2014. Reeeeeeeallly now? The 21-year-old, pulled over in Oregon, also faced charges of reckless endangerment (his girlfriend was apparently in the car), harassment, and strangulation (for choking her). 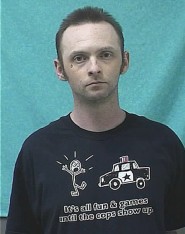 Yes, “It’s all fun and games until the cops show up.” This 35-year-old and his girlfriend were arrested in May, 2014, accused of robbing a bank in Cottonwood, Idaho. We get it, there’s a funny little cartoon man on the shirt, but come on, and you don’t have to tempt fate by wearing it. Police were tipped off after a witness saw him allegedly spending loads of cash at the casino. 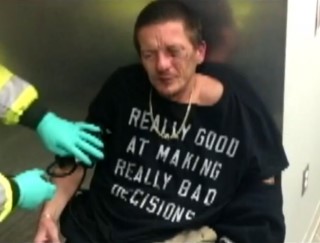 Not that’s we’re going to give it to him, but this man looks like he needs a hug. He was arrested in January for retail theft, and aggravated assault after he tried to drive off, knocking a cop to the ground. Investigators later turned up what they say was his drug paraphernalia. Anyway, the officer only suffered minor injuries. 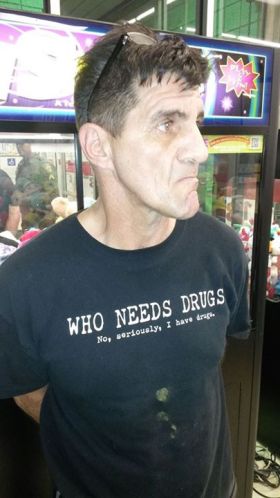 This 50-year-old was arrested for drug possession in January, 2015, according to the Pasco County Sheriff’s Office in Florida. He was busted after allegedly trying to give someone marijuana, but refused to talk after his arrest. 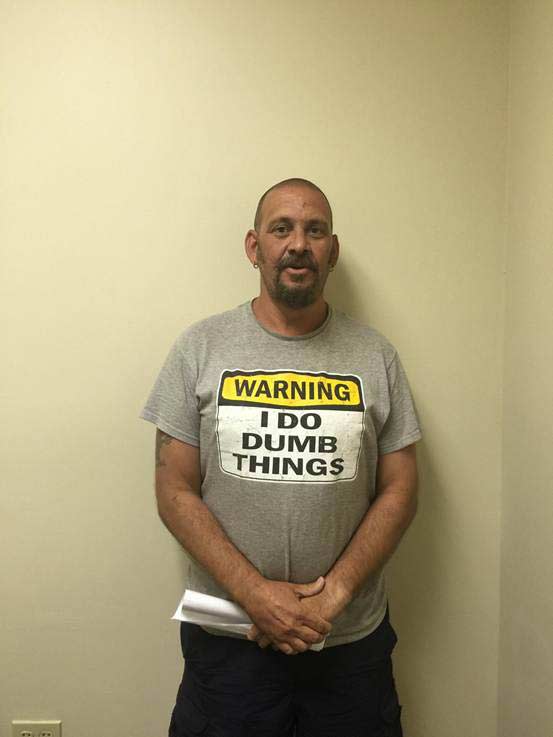 Where have we seen a shirt like this before? Give us a moment, we need to think back…can’t remember! Police in Naples arrested this 40-year-old man in April 2015 for vehicle burglaries. The charges: burglary of a conveyance and criminal mischief. 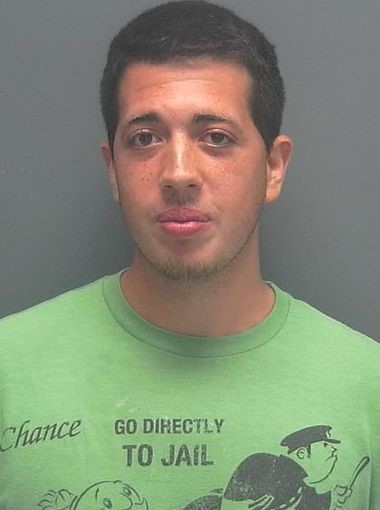 Here we go, another fashion icon daring an arrest. This 20-year-old was arrested in Lee County, Florida in October, 2014 on charges of possessing marijuana, and drug paraphernalia. That’s a monopoly shirt if you can’t tell, but we’re pretty sure that game doesn’t require getting high.

This One Deserves a Medal 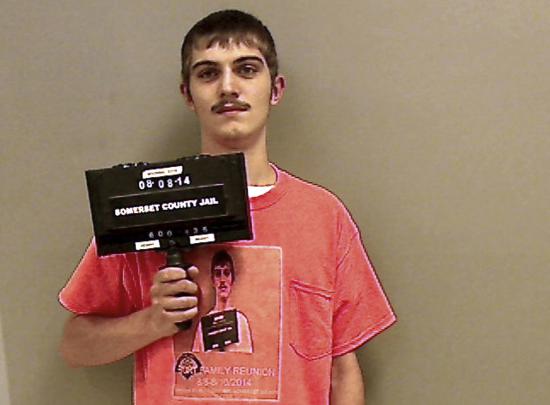 We’re not ranking these or anything, but this might be the best one. Back in June, 2014, this 19-year-old was charged (and later convicted) for a DUI in Somerset County, Maine. And yes, there was a mugshot taken. That’s not what you’re seeing here, though, not exactly. This pic comes from when he started a two-day jail sentence the following August. A co-worker made him that shirt to wear: It depicts the actual picture from his June arrest. It’s a Russian-doll of mugshots, people. Stand up and clap for this guy. This article is over.

What did you think? Any good ones we missed? And no, we’re not quite sure why they’re all guys. It just turned out that way.