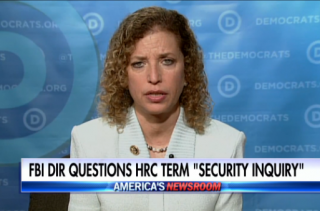 Throughout her campaign, Democratic Presidential candidate Hillary Clinton has referred to the FBI probe into her private email server as a “security inquiry,” seemingly downplaying its significance, while others called it an investigation. After FBI director James Comey flat out said that not only is it an investigation, but that he’s “not familiar with the term ‘security inquiry,'” Clinton’s semantic tactics seemed to no longer work. A new approach was needed to address what is clearly an FBI investigation.

Enter Democratic National Committee Chairwoman Debbie Wasserman Schultz, who discussed the matter with Fox News on Friday. When asked about Comey’s characterization of the probe as an investigation, the DNC Chair said, “Secretary Clinton isn’t even a target of this inquiry, investigation, whatever ‘I’ word you want to use.”

Points for creativity, I guess, but when you make a statement that bold, you have to back it up. When pressed on how she knows this, and if the FBI told her, all Wasserman Schultz could say is, “I am only repeating what my understanding is,” which is about as empty a sentence as there is.

And after all that, she still wouldn’t use the word “investigation” to describe what’s going on, except to include it with “inquiry” or “whatever you want to call it.” Even at the end, when asked again if Clinton is taking the investigation seriously, Wasserman Schultz talked about how Clinton has turned over 55,000 pages of emails “throughout this ‘I-word,” actually laughing out loud after speaking the phrase. She then insisted that it won’t be a factor when people elect the next President.

So even if Clinton is taking the investigation seriously, the DNC Chairwoman is trying really hard not to, or at least hoping voters won’t.