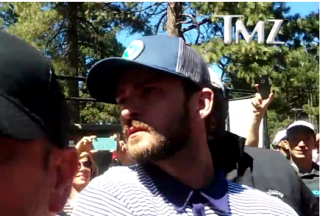 Pop superstar Justin Timberlake was attending a charity golf outing over the weekend, when a spectator just couldn’t keep his hands to himself. While JT was strolling through the crowd at the American Century Celebrity Pro-Am tournament in Lake Tahoe, an unknown man reached out and smacked him in the face, TMZ reported.

As seen in the video below, Timeberlake didn’t appear to be hurt, just really annoyed. “Why would you do that?” He can be heard asking in response.

The answer? According to law enforcement, the man simply wanted to “touch” the singer.

Sheriff deputies tried to escort the man off the premises, and Timberlake reportedly didn’t want to press charges, but then the guy refused to leave. Authorities told TMZ that the man appeared drunk and was being belligerent, so they arrested him for disorderly conduct.