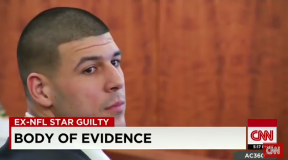 A Massachusetts judge ruled that former New England Patriot, Aaron Hernandez’ tattoos will come into evidence in his double murder trial. Three out of ten Americans have a tattoo so this ruling will have widespread effects in an area of the law that remains unsettled.

Whether or not tattoos come into evidence has been debated in many criminal trials. This is due, in large part, to the fact that tattoos and gang membership are closely connected and gang membership and criminal activity is closely connected. Defense attorneys raise a variety of arguments when fighting a prosecution motion to admit tattoos into evidence. Those arguments vary depending on the purpose for which the prosecution plans to use the information.  And, to be fair, it’s not always the prosecution that seeks to admit tattoo evidence.  In another Massachusetts case, a defendant wanted to display the tattoos on his forearms to the jury to rebut eyewitness testimony of him as the robber. The trial court refused to allow him to do so and he was convicted. He appealed that conviction and argued that the trial court was wrong in refusing to allow him to show the jury his tattoos.  He won the appeal, the judgment was reversed and the verdict was set aside. Also, because tattoos can have a variety of meanings—even ones that are pretty well recognized, like a tear drop tattoo underneath the eye indicating gang membership—and are subject to interpretation they can raise issues of doubt and so they can ultimately help a defendant beat a charge because all a jury needs not to convict is reasonable doubt.

Aaron Hernandez is covered in tattoos but the prosecution was seeking admission of only three, specifically.  All three are on his arm and all three he got AFTER the double murder. The timing is important.  As in the case referenced above, courts have long addressed the issue of admissibility of tattoos. Tattoos are like limps or birth marks or other personal characteristics that help witnesses identify suspects—they are oft-raised in criminal matters.  What’s different with Hernandez is that admission of the tattoos was being sought to show a connection to the commission of the crimes, a commemoration if you will.  These are the three tattoos at issue.

Because the former NFL star had these tattoos done after the victims were killed, the prosecution argued that they link him to the crimes and should therefore be admissible. Specifically, they argued that five shots were fired into the car in which the deceased were found and that evidence shows that the gun used to shoot the witness to the double murder was a semiautomatic and allegedly one spent shell casing was found on the ground next to that witness. (The whole witness story is pretty interesting, albeit a tad confusing. Bradley, the witness, and Hernandez, were friends and out together the night of the 2012 double murder. Apparently Bradley saw what happened.  In 2013, Hernandez and Bradley were together in Florida and that is when Hernandez allegedly shot him in an attempt to silence him regarding what he saw that night in Massachusetts. And another interesting twist? Just yesterday, Bradley was sentenced to five years in prison for his involvement in a 2014 Connecticut bar shooting.)

Hernandez’ defense team, which, by the way, now boasts 5 powerhouse lawyers, countered by saying the prosecution’s theory was speculative, called for inference and that the tattoos were not relevant. Moreover, allowing jurors to hear about these tattoos would violate Hernandez’ constitutional right to a fair trial.

As noted at the outset, the court did not agree with the defense and those tattoos are coming into evidence for the purpose of connecting Hernandez to the crimes. Legally speaking, I am not sure I agree with the judge’s ruling.  As mentioned above, people get tattoos for a variety of reasons and when someone other than the person who decided what tattoo to get and where to put it starts assigning meaning to it we enter, as the defense argued, an area of speculation that could be prejudicial and improperly affect the outcome of a trial.  Common sense-wise do these tattoos seem very directly related to those double murder? Yes, of course they do.  But, that doesn’t mean they should be admitted into evidence.  Defendants have rights and in order for our system to operate properly those rights need to be protected. If Hernandez is convicted, I can promise that this will not be the end of the tattoo discussion. This ruling may just have created an appealable issue for him that a higher court will have to address.  I guess we will see in a very short time—the Hernandez trial is set for February 13, 2017.

Jill Stanley is a criminal defense, former prosecutor and guest lecturer at the George Washington University Law School. She is also founder of www.PROOFwithJillStanley.com.